The Lasting Effects of the Federal Reserve Act

Is the Federal Reserve Act Constitutional?
By Corey L. Rollins

“We have restricted credit, we have restricted opportunity, we have controlled development, and we have come to be one of the worst ruled, one of the most completely controlled and dominated Governments in the civilized world no longer a Government by free opinion, no longer a Government by conviction and the vote of the majority, but a Government by the opinion and duress of a small group of dominant men.”
-Woodrow Wilson (Wilson, 1921)
To understand the Federal Reserve Act, you must first understand what the Federal Reserve System is. The Federal Reserve System was created by the enactment of the Federal Reserve Act in 1913. Its’ current duties, are to manage the U.S. monetary policy, supervise and regulate over all other U.S. banking institutions and provide loans to the U.S. government, smaller banks and foreign institutions. (FRBSF, 2013) Many people believe that the Federal Reserve banks are government institutions. This is not true; the Federal Reserve is owned by private shareholders. One-hundred percent of these shareholders are private banks and absolutely none of its’ stock is owned by the U.S. government. Although the Fed’s (Federal Reserve’s) official website claims that it is not privately owned, there is overwhelming evidence to support that this is false.
Following the panic of 1907, the Federal Reserve was established as a “lender of the last resort.” The Fed’s purpose at the time was the same as it is now, to keep the private banking system operational; and that meant maintaining a monopoly on the production of the national money supply. Except for coins, every U.S. dollar is currently created as a debt to the Federal Reserve, or more accurately, the banking system it heads. The Federal Reserve does not receive funding through the congressional budgetary process; its’ primary source of income is from interest received through government securities that it has obtained through open market operations. (Brown, 2013) The reason that we have an income tax is to repay the loans issued by the Federal Reserve. Without the Fed, there would be no need for an income tax. (Kidd, 2001)

In the early history of the United States, very few taxes were imposed on its’ citizens. From 1791 until 1802, the U.S. government collected taxes limited to the sale of alcohol, carriages, sugar, tobacco, auctioned-off property, corporate bonds, and slaves. This money was used to maintain government operations. However, In order to pay off the debts incurred from the War of 1812, the government imposed sales taxes on jewelry, silverware, watches and gold. Congress eliminated those taxes in 1817, and, instead, supported itself simply by collecting tariffs from imports brought into the country. The government continued to support itself with these tariffs until 1862, when the government needed more money to finance the Civil War effort. This is when the United States passed its’ first law on income tax. This tax was based on a progressive scale, similar to what is used today and the lowest tax rate was three percent. The Act of 1862 was also the birth of the office of the Commissioner of Internal Revenue, or what is now known as the Internal Revenue Service, or IRS (for the most part, the Commissioner’s powers were in line with the powers that the IRS has today). Tax rates were changed with the Internal Revenue Act of June 30, 1864, and the lowest tax rate became five percent (all other tax rates increased as well). This tax change was deemed necessary in order to generate additional revenue to fund the Civil War. After the Civil war ended in 1865, it took another seven years for the additional taxes to be eliminated.

Once more, congress looked instead to alcohol and tobacco for revenue. The U.S. Supreme Court later ruled in 1895, that the taxes collected during the Civil War period were unconstitutional because “the taxes were not collected properly by the states”. This is why in 1913, the Federal Reserve Act and the 16th Amendment to the U.S. Constitution were signed into law by President Woodrow Wilson, ensuring that “income taxes were a permanent part of the United States economy, and Congress could tax incomes however they saw fit”. (Essortment, 2011) 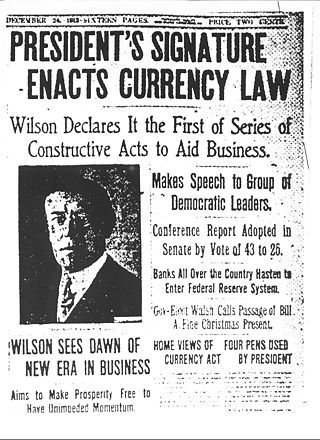 In a speech delivered to the House of Representatives, the father of the famous aviator, Congressman Charles A. Lindberg, Sr. (R-MN) stated, “This Act (the Federal Reserve Act, Dec. 23rd 1913) establishes the most gigantic trust on earth. When the President signs this bill, the invisible government by the Monetary Power will be legalized. The people may not know it immediately, but the day of reckoning is only a few years removed. The trusts will soon realize that they have gone too far even for their own good. The people must make a declaration of independence to relieve themselves from the Monetary Power. This they will be able to do by taking control of Congress. Wall Streeter’s could not cheat us if you Senators and Representatives did not make a humbug of Congress… The greatest crime of Congress is its currency system. The worst legislative crime of the ages is perpetrated by this banking bill. The caucus and the party bosses have again operated and prevented the people from getting the benefit of their own government.”

The early 19th century predecessor to the Federal Reserve was the Bank of the United States. In 1829, when Andrew Jackson became President, he vowed to limit the banks power over the economy. He called the institution “a hydra-headed monster… it impaired the morals of our people, corrupted our statesmen, and threatened our liberty. It bought up members of Congress by the Dozen… and sought to destroy our republican institutions.”

The bank president conspired with members of congress including Henry Clay and Daniel Webster to petition for an extension of the bank’s 20 year charter. Since it was an election year, they assumed that if congress approved the extension, Jackson would not risk losing a re-election for a veto. They assumed incorrectly. Several of the reasons Jackson cited for vetoing the charter included:
“•It was a dangerously centralized financial power
•It held an unconstitutional monopoly on finance that only helped the rich get richer
•It made the economy vulnerable to foreign and special interests
•It held too much influence over federal politicians
•It favored the North (where most financial centers were located) over the South and West” To the surprise of his opponents, the American people sided with Jackson on the decision, and despite the veto, he easily won the re-election. Emboldened by his big victory, Jackson ordered the treasury secretary to withdraw federal funds from the bank, draining the capital that the Bank needed for briberies. Without federal funding, the bank died shortly afterwards. Jackson’s victory improved economic conditions and provided citizens with more freedom throughout the 1840’s and 1850’s. Ironically however, his devotion to the spoils system, doubled the size of the government in his term which cut into the prosperity and liberty created by defeating nationalized banking. (Coffey, 2012) Jackson was far from a saint, the architect of the trail of tears’ greatest accomplishment, in his own opinion, was that he “killed the Bank” (the epitaph many people believe to be engraved on his tombstone). (Mitchell, 2008)
According to former congressman Ron Paul’s official website, “The Federal Reserve is the chief culprit behind the economic crisis. Its unchecked power to create endless amounts of money out of thin air brought us the boom and bust cycle and causes one financial bubble after another. Since the Fed’s creation in 1913 the dollar has lost more than 96% of its value, and by recklessly inflating the money supply the Fed continues to distort interest rates and intentionally erodes the value of the dollar.” Ron Paul has long argued that the Federal Reserve is outright illegal. Once quoted saying, “One thing is clear: The Founding Fathers never intended a nation where citizens pay nearly half of everything they earn to government.” some of his condemnation is based on Article 1, Section 8 of the U.S. Constitution, which assigns the right of coining money to congress. Remember, as I mentioned earlier, the Federal Reserve is not a government entity, but instead, a private one.

On January 26, 2011, Paul introduced the Federal Reserve Transparency Act of 2011 to congress and on July 25, 2012 Paul’s “Audit the Fed” bill was passed by the House of Representatives with bi-partisan support, 327 to 98. However, according to U.S. Rep. Paul Broun, (R-GA) “The do-nothing Senate failed to act on the bill before the end of the 112th Congress, causing it to flat line.” He then stated, “Moving forward, my plan is to pick up right where Congressman Paul left off” in early January, 2013. (Unruh, 2013)
In only ten years, the U.S. national debt has nearly tripled. (TreasuryDirect, 2012) Currently at over 16 trillion dollars, that is over $50,000 per citizen, when divided up. (U.S.DebtClock, 2013) Now we are being told that we need to generate a substantial amount of money to protect and maintain a heavily flawed system whose sole objective is to further empower and enrich the Federal Reserve bankers who own and operate the system.

It has been many years since the United States became the most indebted nation on Earth. On April 21, 1992, Senator John Danforth, from Missouri stated “I have never seen more senators express discontent with their jobs. … I think the major cause is that, deep down in our hearts, we have been accomplices to doing something terrible and unforgivable to this wonderful country. Deep down in our hearts, we know that we have bankrupted America and that we have given our children a legacy of bankruptcy. … We have defrauded our country to get ourselves elected.” Unfortunately, the national debt has quadrupled since he said this in 1992. (Mann, 1992)
References
Brown, E. (2013, January 19). Who Owns The Federal Reserve? Retrieved from Global Research: http://www.globalresearch.ca/who-owns-the-federal-reserve/10489
Charles A. Lindbergh, S. (1913, December 22). (1859-1924) Congressman (R-MN), father of famous aviator. In a speech before the House of Representatives.
Coffey, W. (2012, January 15). Andrew Jackson and the Central Bank. Retrieved from Tea Party Tribune: http://www.teapartytribune.com/2012/01/15/andrew-jackson-and-the-central-bank/
Essortment. (2011). United States Income Tax History. Retrieved from Essortment.com: http://www.essortment.com/united-states-income-tax-history-21186.html
FRBSF. (2013). What is the Fed? Retrieved from frbsf.org: http://www.frbsf.org/what-is-the-fed/?utm_source=home
Kidd, D. (2001, June). Why an Income Tax is Not Necessary to Fund the U.S. Government. Retrieved from Devvy.com: http://www.devvy.com/notax.html
Mann, F. (1992). The Economic Rape of America Chapter 3. Free America! Institute.
Mitchell, K. A. (2008, December 1). President Andrew “I Killed the Bank” Jackson, Where Art Thou? Retrieved from Ezinearticles: http://ezinearticles.com/?President-Andrew-I-Killed-the-Bank-Jackson,-Where-Art-Thou?&id=1733200
TreasuryDirect. (2012, September 30). Historical Debt Outstanding. Retrieved from TreasuryDirect.gov: http://www.treasurydirect.gov/govt/reports/pd/histdebt/histdebt_histo5.htm
U.S.DebtClock. (2013, February). U.S. Debt Clock. Retrieved from USDebtClock.org: http://www.usdebtclock.org/
Unruh, B. (2013, 1 3). It’s back! ‘Audit the Fed’ launched. Retrieved from WND: http://www.wnd.com/2013/01/its-back-audit-the-fed-launched/
Wilson, W. (1921, October 15). The New Freedom: A Call for the Emancipation of the Generous Energies of a People. Columbia University: Doubleday, Page.
Posted by Unknown at 5:14 PM